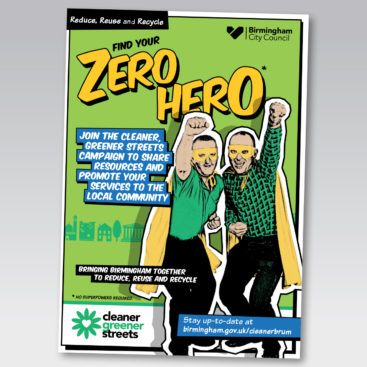 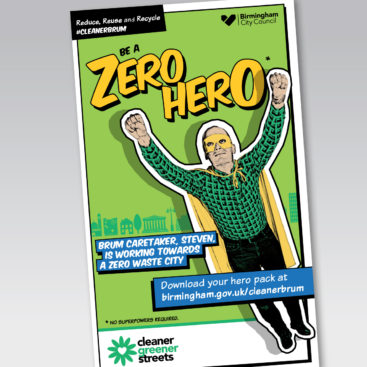 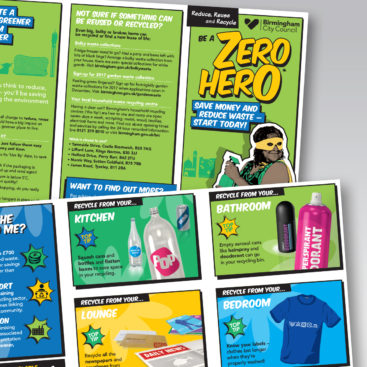 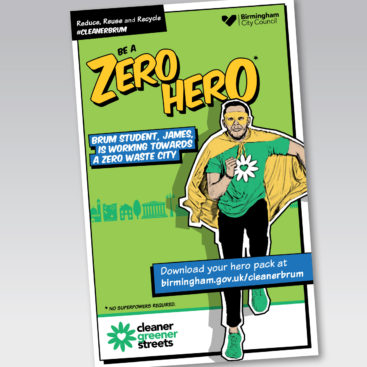 Brief: Create a behaviour change campaign for Birmingham City Council’s Cleaner Greener Streets ‘reduce, reuse, recycle’ (RRR) campaign. The objective was to encourage those who live or work in the city to develop better behaviours towards waste management. The long-term goal is to reduce the amount of waste going to landfill to zero by 2035.

Approach: We found that standard RRR campaigns often focus on the waste itself, but our research showed those with a low recycling competency level do not relate to these types of campaigns. Instead, we focused on a behaviour change campaign of ‘positive action’, which led to the development of our ‘Zero Hero, help make Birmingham a Zero Waste City’ concept.

By showing images of actual residents in the role of a Zero Hero, other residents identified with the images and began to appreciate that they were responsible for their own waste – rather than thinking it’s the council’s issue. For those with a low level of technical literacy (typically older residents) there were printed residents’ advice packs distributed at roadshows. For younger, more technologically switched on residents there was a specially designed accessible website with links to local RRR facilities and a structured social media campaign across all channels, including Twitter, Facebook and Instagram.

The impact on behavioural change is being monitored through a dashboard of analytics as well as reviewing the overall volume of waste to landfill as the council moves towards its zero waste target. Over 3,000 residents’ packs were distributed throughout a week of roadshows, against a target of 2,400.