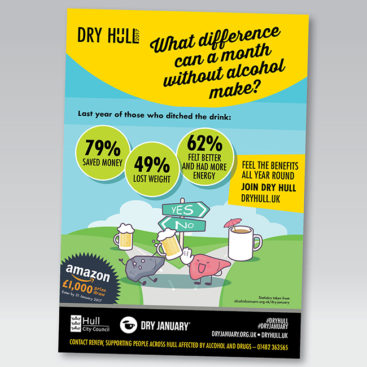 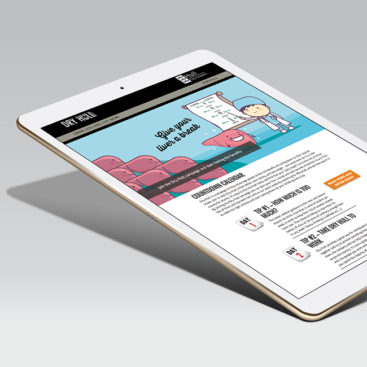 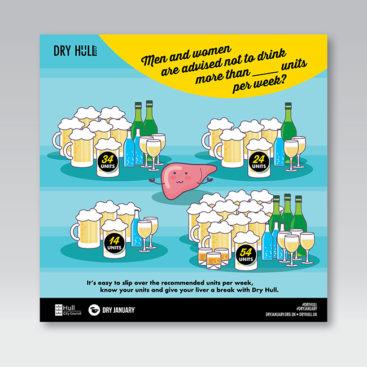 To create a ‘Dry Hull’ campaign to raise awareness of the health impact when drinking above the recommended allowance, to coincide with the national Dry January campaign.

Approach: The target audience were predominantly between 18–39, and tend to binge drink during the week as well as at weekends. Our approach was to raise awareness of the health impact of regular habitual drinking and encourage attitudinal changes to promote sensible drinking habits. We engaged with the audience by promoting key messages on cutting alcohol consumption using digital tools such as the app, social media and a bespoke Hull landing page. The ‘Dry January’ messages were also utilised here.

We developed an informative integrated campaign featuring an illustrative concept to echo the national campaign, helping the audience understand the benefits of not drinking and the alternative social activities. The campaign comprised a new website featuring a series of daily micro blogs, supported by a social media campaign across Facebook and Twitter. As well as an online competition for Hull participants in Dry January to sign up for the chance to win £1,000 Amazon vouchers.

We also coordinated a number of pop-up events in Hull city centre with a mini quiz and Dry Hull branded pint and wine glasses with unit levels marked on the side to help people count their units better at home.

Hull City Council were extremely happy with the swift turnaround and the campaign reach.